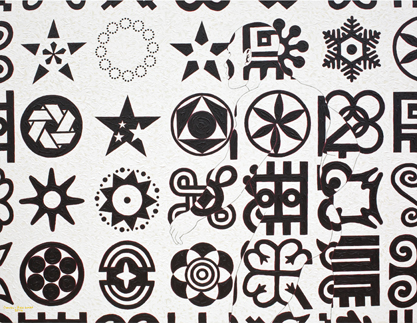 Skoto Gallery is pleased to present Microcron Begins, an exhibition of a new series of paintings by the Ghanaian-born artist Owusu-Ankomah. This is his third solo show at the gallery. The artist will be present at the reception on Thursday, October 23rd, 6-6-8pm
Owusu-Ankomahs work is informed by a sophisticated discourse on traditional philosophical concepts as well as a deep understanding of the aesthetic and cultural character of the African continent. He draws inspiration from the visual power of symbols including the ancient Adinkra sign system of his homeland, abstract symbols, logos and ideograms from contemporary global cultures combined with an awareness of a vast array of both formal and inherited traditions.to create work that is dense with visual complexity.
A master of harmony and dissonance in composition, his highly characteristic and clearly recognizable work seeks to balance spatial and structural concerns. He exploits the themes of memory, history and the passage of time through the filter of personal experience to create work that is never merely decorative, yet embodies a philosophy of communication which obliges us to reflect anew upon common elements of our humanity. His work evinces an ability to reconcile intelligence and sensibility, knowledge and intuition as well as matter and spirit.

Integral to the body of work in Owusu-Ankomahs new series is the symbol of the Microcron, a word coined by the artist is the circle of circles, the confluence and reincarnation of all signs and symbols. It stands for an all-embracing order system of being and thoughts; it stands for the unit of man, nature and cosmos. It is the ultimate symbol, the symbol of symbols. He explores notions of spiritualism and spirituality, the nature of consciousness, metaphysics, quantum physics, scientific cosmology and their philosophical implications to create strong works that reflects a continuum between the inherited past and a self-determined future. He possesses an inimitable ability to unite a limited palette of black and white with hints of color, light and surface while pushing the bounds of his aesthetic to create works of remarkable elegance and lyrical beauty. The muscular male figures in his work are naked, radiant and self-confident, set within a universe of symbols with partial outlines of their bodies refracting light as they weave in and out of a hidden world that reflects the balance of mind, body and spirit within the vessel of the human body. The new works reveal an acute awareness of the diversity, contradictions and complexity of modern society as he explores the tension between contained pictorial energy and boundless space. 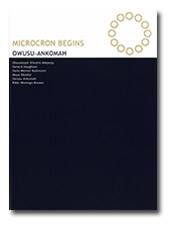 We have pleasure in inviting you and your friends to the opening of the exhibition in the KUNSTGEBÄUDE IM SCHLOSSHOF BODENBURG on 6th September 2014 at 5 p.m. 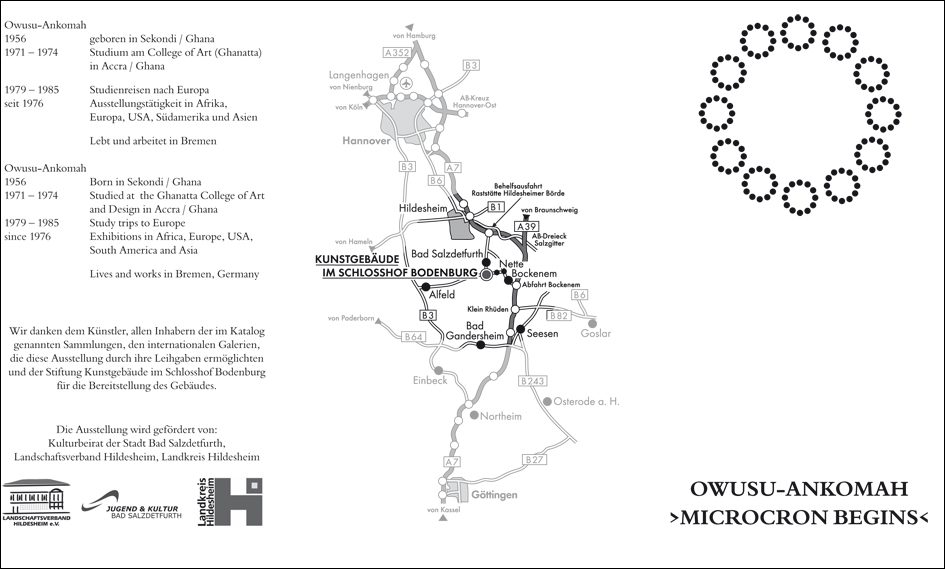 By way of an introduction to the exhibition, Heike Flerlage and Hans-Werner Kalkmann will be talking to the artist about his new cycle of works.
The present exhibition of the works of Owusu-Ankomah is the artist's second solo exhibition to be shown in the Kunstgebäude. His works have also taken part in several of our international group exhibitions, and his stainless steel sculpture Durchblick has already been greeting our visitors for the past three years.
It is not least our trustful and long-standing relationship with the artist that has prompted him to exhibit  for the very first time  a selection of 40 closely related works from his cycle MICROCRON BEGINS, works that may justifiably be described as the fruits of very hard work. We are both pleased and grateful, as these works  and the messages they hold - will soon be embarking upon their journey around the world and we may assume that they will never again come together for such a comprehensive showing.
Also worthy of your attention is the copious catalogue that accompanies this cycle of works and celebrates the oeuvre of this extraordinary artist with detailed, in-depth essays and 90 colour illustrations.
Hans-Werner Kalkmann
Chairman 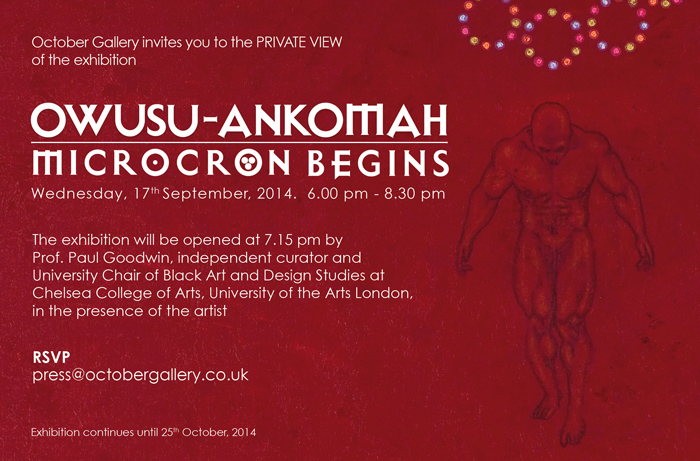 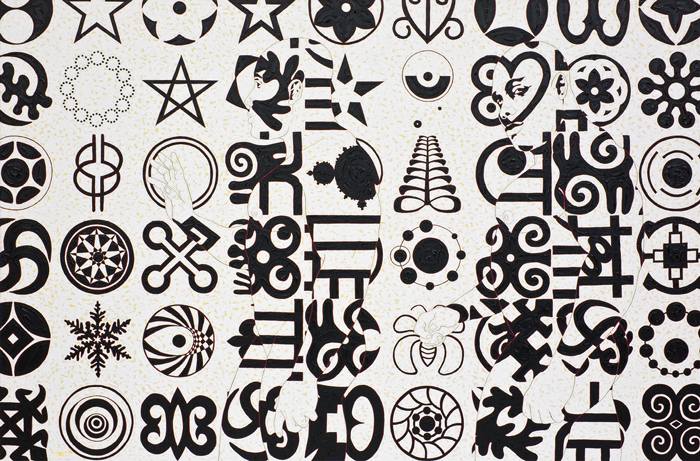 October Gallery will exhibit a body of new work by the well-known Ghanaian artist, Owusu-Ankomah.
Born in Sekondi, Ghana, in 1956, Owusu-Ankomah pursued studies in Fine Arts at Ghanatta College in Accra before moving to Bremen, Germany where he now lives and works.
His charged paintings on canvas depict an alternate world wherein monumental human figures are shown moving within an ocean of signs that surround, support and, in fact, define them. The way in which these figures coexist and interact with various symbolic sets has developed through distinct phases over time, reflecting Owusu-Ankomahs own journey of spiritual discovery.
In these latest works, Owusu-Ankomah uses a palette of new colours, and further develops his artistic language by adding signs of his own invention to the customary lexicon of adinkra symbols which each represent a particular concept used by the Akan-speaking peoples of Ghana. Owusu-Ankomah extends his visual explorations in novel directions by developing the innovative symbol, of the Microcron  a circle of shining orbs signifying universes within universes, and musing about the possibility of a parallel coexistence of multi-dimensional universes within a single multiverse.
To attend the Private View on Wednesday 17th of September please RSVP press@octobergallery.co.uk
Gallery Talk: Owusu-Ankomah
On Saturday 20th September, at 3.00 pm, Owusu-Ankomah will discuss his work and creative process in conversation with Gerard Houghton, Director of Special Projects, at October Gallery.
Reserve your free place via Eventbrite;
Gallery Talk: Owusu-Ankomah - Saturday 20th September
Founded in 1979, October Gallery is a pioneer gallery exhibiting innovative, contemporary art from around the world, and creator of the Transvangarde, the trans-cultural avant-garde.
Art Sales: art@octobergallery.co.uk
Rentals & Events: events@octobergallery.co.uk
Press & Media: press@octobergallery.co.uk